This article has been generated by a settlement-historical analysis performed by three students of the University of Roskilde. The authors have examined the geographical allocation of various Danish settlement types compared to the type of soil of their immediate neighbourhood. Based on the place-name theory, the article focuses on two groups of villages, namely a group consisting of place-name types from the Iron Age (-inge, -lev, -løse, -um (-hem) and -sted) and the thorpes (-rup, -strup and -drup). The investigation was based on a digitalisation of the accurate position of all Danish villages (in 1682) on a computerised map of Denmark, which afterwards was compared to a digital soil map. By using the GIS-programme ArcView, the soil type distribution in different distances from the village centre was calculated, in order to identify any soil variations in the potential infield area of the two village groups. The purpose of the entire analysis was to test the various theories about the foundation of the thorpes in late Viking Age and the beginning of the High Middle Ages.

The “classical” theory has been that the thorpes were built on marginal lands in accordance with a major increase of the population. Because of this marginal allocation and a general fall in population during the 14.th century, many thorpes were abandoned and dismantled during the so-called “Late Medieval Crisis”. This theory was first challenged by Viggo Hansen, who found basis for a close relation between the foundation of the thorpes and an increasing importance of distance as a cost parameter in a period, where Danish agriculture is supposed to have changed from being based on cattle to be based on grain. Especially transportation of manure and ploughing would make it worth while considering to raise a farmstead or even a hamlet on land more than 1 km away from the old village. Erland Porsmose too, in his many studies of the settlement patterns of Funen, was able to reject the idea of thorpes as marginalized hamlets on unfertile wasteland. On the contrary, Porsmose found signs of the exact opposite situation, as the thorpes of Funen seemed to be equal or even better off than the old villages (’adelbyerne’) in matters such as fertility of the soil and distribution of meadows.

The present GIS-based analysis for the whole of Denmark did not support the findings from Funen. The study showed, that the old villages (with Iron Age place-name types) had a significant larger amount of loamy soil types in their surrounding area than did the thorpes. The same result occurred with different strength on national and regional level; only in Funen and Northern Jutland the differences were not statistical significant. Due to general studies of the fertility of the different soil types, this result could support the first mentioned theory of marginalisation. Against this interpretation, it could be argued, that the high water content of loam could be anticipated to perform a problem (due to poor drainage) for the medieval farmer, just as the introduction of new crops such as rye and oats would make sandy soil less secondary to loam, but this does not explain, that even in areas with only sand and loamy sand (such as most of Jutland), the thorpes still were situated on more sandy soil than the old villages. The analysis was concluded by a study of three districts (’herreder’) in North-West Zealand with different soil types and place-name distributions. Here, both the village types and the soil types were held up against the land taxation of 1688. In all three districts, there was a distinct tendency towards higher taxation of the soil types, where the old villages were dominating.

Table 1. The Danish soil classification. (All numbers in %) 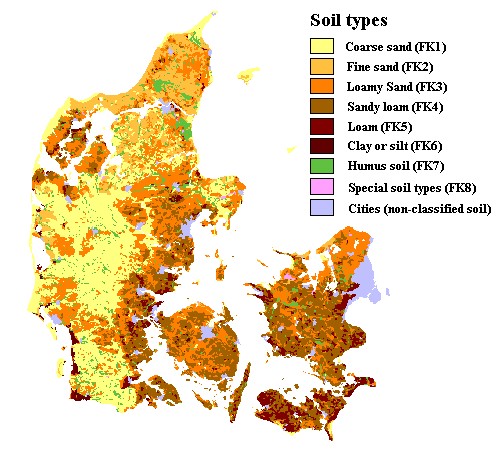 Table 2. The total distribution of soil types in Denmark and the Danish soil map.

Fig. 1. Distribution of soil types of the two village groups in all of Denmark.

The white columns represent the entire soil distribution (within the range of FK1-FK7 only). The black columns show the soil distribution of the Danish thorpes in a radius of 1000 m of the village centre, while the grey columns represents the Iron Age place name types (-inge, -lev, -løse, -sted and -hem). Or in other words: If one takes the soil types in a range of 1000 m of every -thorp in Denmark and put it all together, the black columns show the total distribution of this “total thorp infield area”.

Fig. 2. The regions of the regional analysis.

Southern Jutland, Copenhagen and Bornholm were not included in the analysis due to different reasons; Southern Jutland (The Duchy of Slesvig) was not included in the register of 1682-83, which the geographical village allocation of the analysis was built on; the soil types of the Copenhagen district has not been mapped; and none of the settlements of Bornholm are villages in the definition used for the rest of Denmark.

Table 3. The distribution of soil types in the regions. (All numbers in %)

Regions that did not show statistiscal significant differences between the village groups or did not follow the main trend:

This region differs from the rest in various respects. First of all, the soil type of loam (FK5) is much more common here than in the rest of Denmark. Secondly, on this soil type the thorpes are significantly stronger allocated than the elder villages. The explanation could be, that the islands in question (especially Lolland, where the entire -thorp “over representation” turns out to be generated from) are very flat and the extreme loamy soil could perform a drainage problem for medieval agriculture (as it still does nowadays in rainy periods); however, this hypothesis still has to be verified.

An example of the soil type distribution on villages in a local district of North-West Zealand:

This district only includes -løse villages of the Iron Age place name group. As it is also one of the districts in Denmark with most thorpes, it becomes quite interesting for this analysis, since all the thorpes can be expected to have been separated from original -løse land. In total, the district includes 14 -løse villages and 51 -thorpes.

Here we find, that the differences between thorpes and Iron Age villages are smaller than in the 500 m zone, but still statistical significant. The analysis also showed a significant difference in the areas of the size of the “ejerlav” between the two village groups; while the average -thorpe had an area of 3.2 km2, the average Iron Age village had an “ejerlav” of 5.7 km2.