The background for a peculiar province name

Accounted by Johnny Grandjean Gøgsig Jakobsen (2012-13), based on the article 'Dacia' by Jarl Gallén in Kulturhistorisk Leksikon for Nordisk Middelalder vol. 2, col. 608-610, Copenhagen 1957.

A Danish version of this article is published online by the University of Copenhagen, Name Research Section, 2012.

A Romanian translation of this article is made and published online by www.dracones.ro, 2012.

When the Order of Preachers in 1226-28 decided that the three Scandinavian kingdoms (Denmark, Norway and Sweden) were to form one province within the Order, the name Dacia was chosen for it. An identical choice of name was made by their Mendicant colleagues in the Order of Friars Minor, when the Nordic countries in Franciscan terms were separated from the province of Saxonia in 1239. 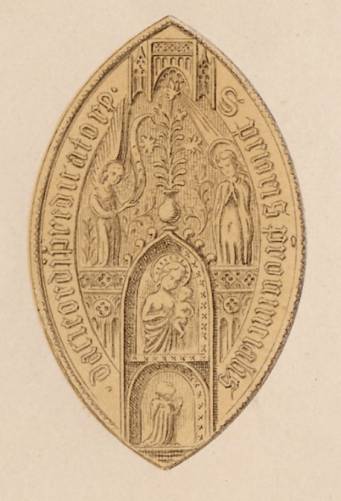 But why Dacia? The province name undoubtedly was meant to refer to Denmark and its inhabitants, the Danes or Dani, but then why not call it "Dania"? Such a Latin name was occasionally used for Denmark in the Middle Ages, but "Dacia" was much more commonly used both for Denmark proper and for the entire Scandinavian region, and the more logical choice Dania only replaced it in post-medieval times. But how did the land of the Danes become Dacia? Linguistically, there is quite a distance between the two, and as it turns out, so there originally was geographically.

Back in the days of Christ, Dacia was the name of a country in central Eastern Europe, equal to present-day Hungary and the Romanian province of Transylvania. The connection to medieval Denmark and Scandinavia seems to be based on some misunderstandings, going back to the authors of Late Antiquity. Or rather, the late antique writers actually got it right, but they were later misunderstood. 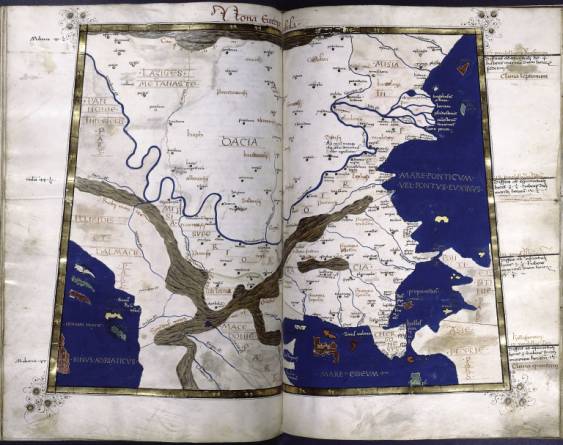 Map of the Roman province Dacia in Eastern Europe. The map is based on written records from the Roman geographer and mathematician Ptolemy (c. AD 150), reconstructed cartographically in a 15th-century atlas. For geographical orientation, the Adriatic Sea is shown down left, the Black Sea and the Strait of Bosphorus to the right, while the river forming the southern border of Dacia is the Danube.

One of them was the historian and geographer Paulus Orosius (around AD 400), who knew that »..Dacia, where also Gothia lies...« was located between Alania and Germania. This wording was copied by Isidore of Seville (around 600), and both authors were widely read and cited throughout the Middle Ages. The Goths were a people, who allegedly originated from Scandinavia, but during the Period of the Great Migrations (c. 400-800), they migrated southwards through Eastern Europe and later westwards through Southern Europe. The placement of Dacia by Orosius and Isidore is from the Gothic period in Eastern Europe, and thus probably all correct, but the stated neighbourship between Dacia and the wandering Goths later on led medieval historians to place the now long gone Antique kingdom of Dacia in more northern latitudes next to Götaland and Gotland in Sweden.

The first extant placements of Dacia in Scandinavia are found in the chronicles of two Norman writers of the 11th century, Dudo de Saint-Quentin and Guillaume de Jumieges, although both of them also were aware that the population of Dacia referred to themselves as "Danes" and to their country as "Denmark". But it was not until the late 12th century that the misunderstanding really worked through, which happened in the papal administration, where a cardinal in 1192 in a record simply termed Denmark as "Dacia" - and after that this soon became the standard papal-ecclesiastical term for both the kingdom of Denmark (regio Dacia) and the Scandinavian church province (provincia Dacia). As eloquently noted by a later scholar: »The transfer of the name to Denmark was an error of such magnitude that it could only have been perpetrated in real life - and in such a word-biased culture as that of the European Middle Ages, when a name might take precedence over the thing it signified.«[1]

Thus, Dacia was an obvious choice of province name for the two Mendicant orders in the 1220-30s, when they formed their Scandinavian provinces, and it was probably not least due to this Mendicant implementation of the misleading name that it soon became so consolidated. Danish and Scandinavian scholars and students abroad - e.g. at the universities in France, Germany and Italy - were often given the byname de Dacia, and even within Scandinavia itself, the term began to spread. One of the earliest Nordic instances is found in the Cistercian chronicle of Ryd Abbey from the late 13th century, which speaks of »Dania que nunc Dacia« ("Dania, which is called Dacia").

As an interesting addition to the name change of Denmark itself, place-names referring to Danes outside Scandinavia sometimes also changed accordingly. This can, for instance, be seen in England, where Danish colonization of the Viking Age had given name to an entire hundred in Hertfordshire, recorded as Daneis and Danais hundred in the Domesday Book of 1086, with similar written forms (Daneis, Danes and Daneys) in 1160, 1161, 1176, 1188, 1190, 1240 and 1255. From 1196 onwards, however, the original element ‘Danes’ was still more frequently substituted by ‘Dacus’ to the alternative name form Dacorum (with variants such as Dacor, Dakore and Daycorum), which completely took over as name for the hundred after the mid-thirteenth century. [2]

To make the confusion complete, Dacia - as already stated - both may refer to the kingdom of Denmark and to the whole Nordic region. Because of this, it can be difficult sometimes to identify exactly what area is being meant in the medieval sources. In Dominican terms, however, Dacia always refers to the orderly province, consisting of houses in the three Nordic kingdoms of Denmark (with Schleswig and Estonia), Sweden (with Finland and Karelia) and Norway (with the Faeroe Islands, Iceland and Greenland - although no Dominican houses was ever founded here). The justification for using a term initially linked to Denmark proper on the entire Scandinavia seems to be that seen from Continental Europe, not least from Rome, the rest of Scandinavia to some extent constituted an appendix to the primary kingdom of the region, namely Denmark. The Danish archiepiscopal see of Lund for a short period formed the metropolitan centre for the Church in all of Scandinavia, and this was just when the term Dacia was introduced for this collective Nordic church province. Even after the separation of Norwegian and Swedish archdioceses and church provinces in the 12-13th centuries, the Roman Church in many ways kept treating the entire region as one ecclesiastical province; for instance with one minor penitentiary de Dacia dealing with all Scandinavian issues at the Papal Curia in the 13th and 14th centuries, and papal inquisitors being appointed for Dacia (= Scandinavia) in the 15th century. In a medieval Europe with ever-changing political borders, it was convenient for the papal church to operate with administrative regions based on something a bit more consistent, namely languages - and heard with Continental-European ears, all medieval Scandinavians spoke "Danish".